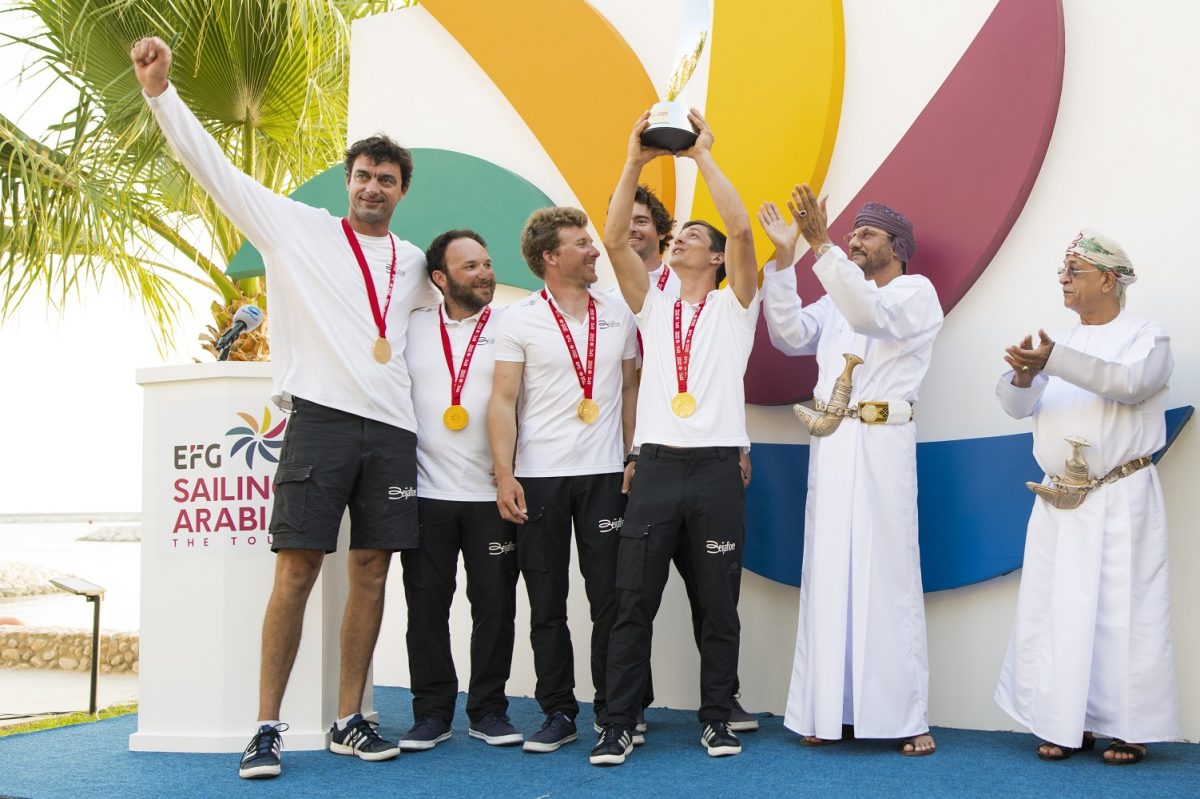 Beijaflore have been crowned champions of EFG Sailing Arabia – The Tour, repeating their success of last year to take back-to-back victories in the Middle East’s premier yacht racing event. The French team produced a remarkable consistent performance on their Diam 24 trimaran during the two-week marathon along Oman’s coastline, gradually building and extending a lead over nine other international teams across five venues and a mix of inshore Stadium races and long coastal Raids. Overall, they finished seven points clear of their nearest challenger, and also won the standalone Stadium Racing trophy.

Coached by Pierre Mas and helmed by Valentin Bellet, the Beijaflore crew held off a determined challenge by the Cheminées Poujoulat team, who had taken an early lead in the Tour after a strong performance at the first venue in Muscat.

“It’s great to win here in Salalah for the second year,” said Bellet. “The whole team is delighted with this victory and we hope to be able to come back next year.

“It’s great to race here, under the sun in Oman, with extremely sharp competition, it’s amazing. Our most consistent competitor was Cheminées Poujoulat – they have been very solid and they deserve their second place.”

Helmed by Robin Follin, and managed by another sailing legend, Switzerland’s Bernard Stamm, the French team further demonstrated their form when they won the final day of Stadium racing in Salalah.

“It’s a beautiful regatta and we are very happy today,” said Follin. “Throughout the event our worst performance was – aside from Masirah – a fourth place. We dug deeply inside ourselves each time we raced and we wanted to stay in the same state of mind all the time.”

They hung on in a final day nail-biter which saw them take third place by just half a point from the young crew on Seaflotech.

“We have earned our result over the Tour, though perhaps not on the last day here in Salalah,” said Morrison reflecting on an uncharacteristic eighth place finish, in the five-race Stadium-style finale.

“Third is a fantastic effort and we can be happy with the result – it is a long regatta and it’s not won or lost in a day. The guys have sailed fantastically. We can all be very proud of what we have achieved. We have got three languages on the boat so we are a pretty unique team, and most of the time we have had a smile on our faces.”

And he added: “We have been blessed with some good wind and great weather, which is pretty typical of Oman at this time of year – it is a brilliant destination. I love the country and the Tour, it is a great format and an all-round sailing experience. To do it here in Oman is just awesome.”

The Salalah prize-giving saw the three podium teams applauded by all the crews and VIP guests during a ceremony attended by guest of honour His Excellency Sheikh Salim bin Aufait Al Shanfari, Chairman of the Dhofar Municipality.

David Graham, CEO of event organisers Oman Sail, thanked the event sponsor EFG Bank, boat sponsors and the event partners and supporters who made it all possible.